I guess I'm used to the new schedule. I was awake at 6AM today. Ugh. No matter how much I tried to get my body to go back to sleep, I was awake. For the day. Dammit. So far today, I've cleaned the basement and done round one of the mopping of the cat piss/shit smell. Then I cleaned out the little eating area in my kitchen so I could steam clean the carpet, which has some stains on it. Stains be gone. AND... I realized that the steam cleaner that I'm using? Also does hard floors. Screw mopping round II, I'm bringing that sucker downstairs and using that. If that doesn't make it all clean and smelling pretty, nothing will. Now I need to start packing some of the clutter. I don't want people looking at my personal pictures and stuff when looking at the house - they don't need to see my stuff - they need to imagine their stuff here. Yeah. That's it. Although - if the house sells quickly, I'm screwed. I have a lease until the end of September, but what if someone comes in and says - hey, I'll buy the house, but only if I can move in July 1st or something like that. Ugh. I don't even want to think about it.
Anywhooo - happy Sunday. I'll leave you with a picture of the deer in the back yard. Before it all exploded green.
Posted by K Dubs at 9:14 AM No comments:

Perfection in a glass...

Undoubtedly the most delightful adult beverage of my life... a Key Lime Pie Martini. It was like a little key lime party going on in my mouth. mmmmmmmmmmmmmm 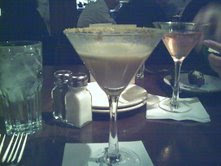 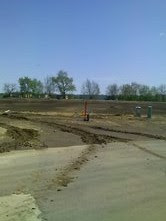 This is the lot. There will be 10 million houses close to it, but once it's done, it will look like this (minus the extra garage): 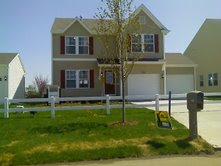 I'm not crazy about how close the houses are together, but hey, if my neighbor needs sugar - I can just toss it over, right? :)
Posted by K Dubs at 6:20 PM No comments:

OK, so the boy has lost video games and computer for the big lie. And he knows that the Red Bull Air race is on the line if he screws up any more. Oy vey, this parenting thing is tough sometimes!! The fact that he told the lie that he did tells me that he was hurt even more than I realized about everything that happened last year. We're still working on that. I guess we both have to get past some anger. It still pisses me off what Theo did to him if I stop and think about it - so I try not to stop and think about it. But then I stop and think about how much of a fool he is, and I laugh. At this point he deserves to have every single penny that the FFW (that would be filthy f'ing whore that will sleep with everyone - EXCEPT Theo) can squeeze out of him - he's been warned by how many people, and he STILL supports her. Oh well. It's pathetic - but I just sit back now and live my life. It's pathetic that his family just chalks it up to "Theo being Theo", because they all think he's a fuckup. I guess this just confirms it? Who knows.

The new job is going great - I haven't blown the building up yet, although I did come close

I forgot to run a report Friday afternoon and just realized it today - so I may hear about that - but you know, I'm new. I don't know that stuff yet.

I talked to a mortgage broker, and I'm meeting her this week to finalize the paperwork - it should be all set to go ~ I also signed a purchase agreement for a house that I haven't seen. Why haven't I seen it? Because the damn thing isn't built yet!!! Woohoo!!!

It should be done mid-September, and my lease is up at the end of September, so the timing should (hopefully) work out perfectly. I'm excited - the house is going to be great, and mine. Mine all mine.
Posted by K Dubs at 9:58 AM 1 comment: