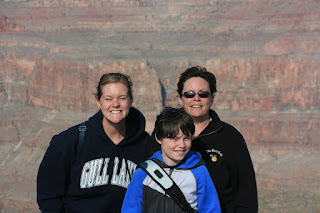 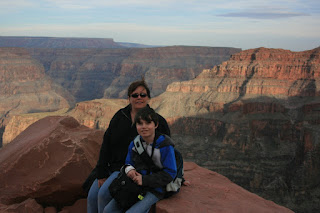 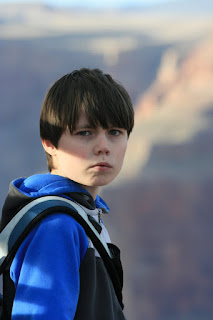 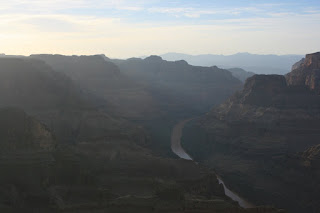 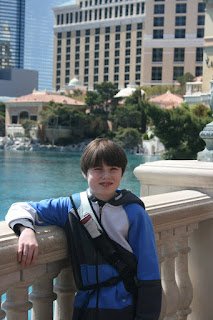 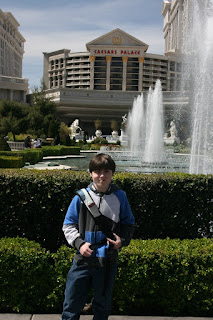 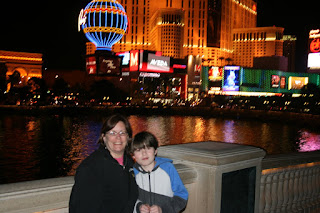 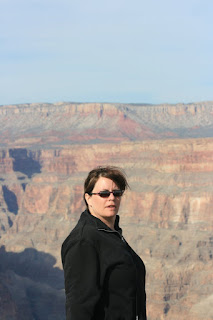 Words cannot describe how beautiful and breathtaking the Grand Canyon is - just amazing. And we only saw a small slice of it!!

Have a great time - wish you all were here :)

Thought I'd just let you all know some things...

Some thoughts of mine?

This is better than late-night Walmart. LOL Apparently, clothing that FITS is optional. We got to the hotel about 9:00 or so last night, and oh my goodness, we haven't been outside the hotel and already the Boy has seen more than he should. LOL

Who knew that there would be a "resort fee" for the hotel that is fully paid for? AND that internet would cost $12/day? Seriously? So to cover all that, they have put a $250 hold on my credit card. Gee, thanks. We'll just put that along with the stupid hold from the car rental company - which added insurance to my rental and that bumped it up $300. Um, no - I'll take the $150 rental without the insurance please. WTF???

My hotel room has no coffee maker or refrigerator. I'm not loving that.

I went to get coffee at the Starbucks in the lobby this morning, and a guy that looked as though he may have been doing the walk of shame - or been up for 4 days straight, asked me if I was just getting there. I said, no we got here yesterday, and then he asked what day yesterday was. Really? OK. Then he told me that he'll be watching for me this week. I threw up a little in my mouth - he was looking pretty rough. LOL But hey - that's the closest I've had to an offer in ages! Maybe I shouldn't look a gift horse in the mouth, right? Right? ROFL

We're off to the observation deck in the Stratosphere, then who knows... The day is young.

one of many - but I just love this one. And they're playing 1/2 hour away from me, in a tiny little club - NEXT WEEK. While I'm in Vegas. AAAAAARGH!!!!

He is a pathological liar - which you will find out, probably too late. He twists reality to suit his own needs (usually making him look the victim) and wants. He is a very selfish person, and will do what he wants to get what he wants when he wants it.

He has had a self-imposed "two year" expiration date on most of his relationships - mainly because his attention span can't last much longer than that. The only reason why you got a ring and a proposal is because you refuse to sleep with him until you're married. We'll give the expiration date a little leeway, but you've been warned.

Don't believe everything he tells you. Especially about his ex-girlfriends. Most of it? Not true. His father will never hand over his company to him. He will never gain full custody of his son. He is considered the fuck-up in his family. And for good reason.

Everyone knows that you write his emails for him - he is a grammatical nightmare, and when they make sense? They're written by someone else. I did it, as did the one before me. We all fell victim to the "poor me" - we just got out before we got sucked in too far. Regardless of what he may have told you. And for me? I'm so much happier now - so when he tells you that I'm bitter and want him back - SO not true. I wouldn't touch him with a 10 ft. pole. I don't care how much money he has.

While some members of his family are wonderful, most of them are not what they seem. They will make you believe they care about you and stab you in the back without warning. They would support him in anything - including locking you out of the house if you try to tell him what to do or suggest anything that he is not in favor of.

Don't ever suggest to him he can't be friends with someone - no matter how much they take advantage of him - or give him an ultimatum - because the act of you telling him "NO" will turn him into the 17 year old boy that he truly is and he will dig his heels deep into the shit that they usually are in - and you will lose.

Run now while you can. It's not worth giving up your integrity, life and all else that you hold on to.

But if you don't run? Get married, pregnant and then take him for everything you can - because in a court of law? Virgin trumps EVERYTHING.
Posted by K Dubs at 4:29 PM 4 comments:

Labels: buyer beware, fuckwits, I love my life now, run as fast as you can

I can't believe it's been a whole month since I've been here! Tons going on - back in school, the boy is doing much better in his classes, he's playing soccer in a recreational league now, work is still - well, work. I've applied for and gotten turned down for a couple of different jobs, but I'm sure that eventually the right job will pan out.
I bought a new car this week - traded in my old reliable Jeep for something with less miles and more toys. Got a 2007 Saab SUV that is loaded, and I got a great deal on it - otherwise I would have kept the Jeep. It had to be something great to make me take on a car payment LOL - I haven't had one in about 4 years. Maybe 5.
Not much else going on - I have been reading off and on through Google, so I'm trying to keep up, it just seems like the days get shorter and shorter, and I'm making a concerted effort to not be on the computer too much. And making the boy not be on his computer so much, too!
Oy - off to get the round brownies out of the oven for Pi day!