I love having the windows open during the summer.  I'd sleep with a fan on me every night if I could - the white noise and blowing air = a great night's sleep.  Usually.  I live in a house with central air.  It's much cooler than a fan.  And when it's humid, like it has been for the past 2 weeks?  A  Godsend.  My son, on the other hand, would live his life in AC.  Where he came from, I don't know.  lol

I had a dream the other night that I was in the hospital for something (not sure - not important to the story) and when I came out of the anesthesia, he told me that #1 he had a girlfriend and #2 she'd just given birth to their baby.  WHAAAAAAAAAAA????????  He's 13.  He hasn't hit puberty yet.  I told him about my dream, and that kids his age were having sex and that if he had any questions about it all, he could ask me.  His response?  "Well this isn't awkward at all!".  Hey - at least I put it out there.

I decided to give match.com a try.  For the 3 days free.  So I have to remember to cancel it tomorrow or I get charged for 3 months (or 6, I'm not sure which one I clicked).  A lot of people have viewed my profile.  One even contacted me about coffee.  Which wouldn't be bad.  But I viewed his profile, and while he is blind, that's no excuse for having a professional picture taken of yourself wearing the American flag in not only your shirt and shorts, but the cowboy hat to match.  I politely declined.  Which could be one of two things.  Either a sign that I've not yet reached that point of desperation yet, or that I'm too picky.  I'm thinking that it's the former, not the latter.

I drop the boy off for a week at camp in about an hour.  While I will miss him, the house will be a lot cleaner when he comes home, and I will have had a week of peace.  Both he and my "other" kid will be gone all week.  We're hosting a player for the local minor-league baseball team and they're on a road trip until the 19th.    I'm determined NOT to go food shopping while they're gone.  LOL

Happy Sunday!  I'm off to read my latest book "Eat, Pray, Love" I've been wanting to read it ever since my friend Erin talked about it.  Maybe it'll give me some insight into the meaning of life.  You never know! 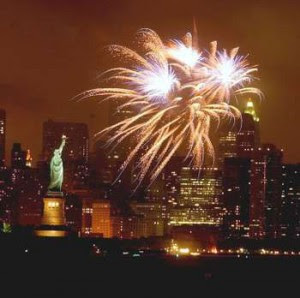 Ooooh - new stuff with the blogs, now I can *see* the picture before posting the blog.  Love it!
Hope everyone has a happy and safe 4th.  A great quote I found - You have to love a nation that celebrates its independence every July 4, not with a parade of guns, tanks, and soldiers who file by the White House in a show of strength and muscle, but with family picnics where kids throw Frisbees, the potato salad gets iffy, and the flies die from happiness. You may think you have overeaten, but it is patriotism. ~Erma Bombeck

On tap for today?  Sangria - the white one.  Only I couldn't find frozen peaches so I threw in frozen mangos and a couple of fresh peaches cut up.  And 2 bottles of wine.  The container had extra room, what can I say?  LOL  Will get back on how it tastes.   A cookout with some friends.  Maybe some baseball.  More baseball.  We are hosting a local minor-league team's player.  He's awesome - and the boy is loving having a "big brother" around for the summer.   I think tomorrow I will have a cookout.  Invite some friends.  Drink more Sangria.  Ahhhhhhhhhhh, summer.  Gotta love it!