What a delightfully tasty weekend!
Yesterday I had to bake a banana cake with cream cheese frosting AND a chocolate cake that looked and smelled to die for. The banana one was specifically requested by the 16 year old birthday girl - and I know that one is really good. The chocolate was a new recipe that I tried out. I made it all pretty, too. And so ends the "a cake a month for a year" that was auctioned off at last year's relay. Thank GOD! LOL 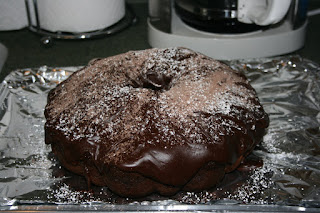 Last weekend, I made Sangria for a graduation party. The guys were drinking it, it was so tasty. Last night we had a "Sangria Saturday" on my friend Kim's deck. Who, by the way - now has hair again. It's gray and really short - but it's hair! She said she actually had to shave her legs, too! Woot!

Put together and let it sit at least overnight. We added ginger ale to cut it because it was strong. And for those that don't like peaches? I can't stand peaches and absolutely loved this.

1 large bottle of red wine (I got the extra large one) - and it doesn't have to be expensive wine, get something middle of the road
1 2 liter bottle of ginger ale
2 limes
2 lemons
1 orange
1 can frozen lemonade
1 big can of pineapple chunks in juice

pour the wine into a container (I bought a 2 gallon cooler with a spout just for this stuff). Add 2 tablespoons of sugar. Add 1/2 cup of orange juice if you have it. Cut the limes, lemons and oranges - squeeze the juice into the wine and then toss in what's left of them so the rest can seep out. Put in the pineapples. I put a couple of shots of raspberry vodka in also. Let it all sit overnight (at the very least).

When you're ready to serve it - add the can of frozen lemonade, a 2 liter bottle of ginger ale and I also threw in a package of frozen raspberries.

Drink up and enjoy! The girl that brought the red last night made ice cubes with raspberries in them - they were awesome in both the red and white. No clogging of the spout - still get the flavor!

The only issue with the closed containers is that nobody can see the fruit or add it to their drinks. Which some may consider an issue - but if you're the owner of said container - you get to EAT the fruit. LOL 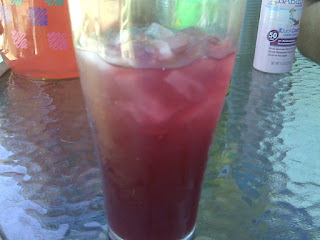 Hope all is well with everyone - new class starts tomorrow (Environmental studies or something like that). I'm off to read, catch up some, and enjoy the morning. :)

Yup. This could be it. My last post ever on the Fuckwit. Hee heee hee - on his wedding day, no less. Because it's come around, as it should have.

Apparently the fuckwit presented the fiancee with a prenup - a little over a week ago. It was the same prenup that his brother had HIS wife sign, so what could possibly be the problem? It left her with nothing. N O T H I N G. Not after 1, 5, 10, 20 or even 50 years. And if he died - she got nothing. She refused to sign it, he refused to budge. She refused to budge. And then told him to screw and moved back to California. Of course he's telling people that he broke it off - but that's not what really happened from what I understand. Another twisted reality to make himself look the victim when he's really not.

She saw the *TRUE* Fuckwit - and his siblings, and what they are all about. Thank goodness for her! I just hope if the whole virgin thing was true that she didn't give it up for him before the wedding.

I'm sorry, but REALLY??? NOTHING? I wouldn't have signed it either. And while that may initially look like it's about the money, it's really not. She gave up her life in California, her family and friends - moved to Michigan - and granted, they wouldn't last for more than a year or two - but she didn't know that. She was expecting to spend the rest of her life with this person. So imagine 30 years down the road something happens to him. They've got 3-4 kids. What is she left with to show of 30 years of marriage? Nothing. Not the house she'd lived in, the job was long gone because he needs full time care (as do those kids!) - that's not worth anything? Really? Even if it was 2-3 years. That's worth nothing? I would think that her virginity at least would be worth something.

So anyway - he showed his selfish, disgusting fuckwit self. His siblings showed that they are all about the money and keeping it close. It's only money. It's unfortunate that to them, it's more important than real relationships with people that don't give a shit about the money. But when it comes down to it - that is what it's all about - to them. Live your lonely lives and wonder why you are all so socially retarded and don't have any *real* friends other than the ones who live in the same bubble you're in and the Fuckwit will continue with ones like, oh... I don't know - the FFW? She's a great example. LOL