Ok, a bit late. But it's never too late to give thanks, right?

I'm thankful for my family. I miss (most of) them like hell, but they also understood why I was moving to Michigan - that my son was more important than anything else, and giving him a better life was the key.

I'm thankful for the opportunities that I've been given here. I live in a brand new house in a brand new neighborhood with a ton of kids. I can let my son run around until 9:00 at night, and plastic guns to the face aside - know that he's safe and I don't need to worry about him.

I'm thankful I have a job. It may not be my ideal job, with ideal people, but it's a job. I have the ability to rise above the petty bullshit that I have to deal with and go in and do my job. I also have opportunities to leave that job, and I'll be thankful if one of them works out :) But if not, I still have a job, unlike so many people right now - and for that, I'm thankful and appreciate what I have.

I'm thankful for my friends. Near AND far. They have proven to be a source of support that is immeasurable. It really is true that friends are the family you choose for yourself.

I'm thankful for the miracles of modern medicine. Kim faces a tough road ahead, but she too has the support of many. More than I could ever gather together, that's for sure! Her cancer was caught early, and her prognosis is excellent. Fingers crossed for good results of her PET scan next week, hopefully that nasty bitch cancer hasn't gone anywhere else.

I'm thankful for my sense of humor. Without it, I think that sometimes I would have gone nuts.

I'm thankful because this blog has allowed me to post things that I couldn't or wouldn't say anywhere else, and there isn't anyone to judge. If someone doesn't like what I say - they just don't comment. Or I can delete it. LOL It's opened up whole new worlds for me, and introduced me to many people that I otherwise wouldn't have met - and I'm thankful for each and every one of you!!

Ahhhhhhhh and last, but not least. The boy. He is my reason for getting up each day, going to that job and paying the bills. He has the best sense of humor, is some day going to do exactly what he wants to do - because we live in a country that allows him that. For which I'm thankful :)

Hope everyone had a wonderful Thanksgiving! I cooked a 17 lb. bird for 4 people. I have turkey coming out my ears. Anyone want some? LOL
Posted by K Dubs at 9:43 AM 8 comments:

This really is the shizz-nit...

I recommend full screen, in HD, if you have it :)

My friend, Kim, is going to see the doctor today. She had a radical hysterectomy done last week, lost her cervix, uterus and a good chunk of her vaginal wall but she's still got her ovaries! There was a tumor (thank goodness benign) on a lymph node close to the cervix so they took that, and sent a couple of others off to pathology to be tested.

Yesterday the doctor called her and said "results are back, I want to see you tomorrow". Now that could be because he's going on vacation next week and doesn't want to wait until her post op appointment. Or it could be that he's so happy he can't wait to give her the news. Or it could be bad news. She's only been home since Tuesday, and is still feeling like a truck hit her, so an almost hour car ride isn't going to be fun.

Eeesh. I'm sending out a message to herself.

Eleven years ago today, my brother and I sat with my mother while she slipped away. It seemed fitting that he and I were there, as we had been with her all through her illness (cancer, that nasty bitch). My youngest brother had just left to go move his car, and my sister wasn't there for reasons I can't remember. It was expected. She had been diagnosed earlier in the year with colon cancer, and had a volleyball sized tumor taken out of her in April. She went downhill rapidly, but had time to say goodbye to all of us. She told me how proud she was of me for all that I had accomplished, and said I was a lot like her - stubborn and always taking the hard road - never the easy one. While in her later years (which would be late 40's early 50's), I got to know my mother more and more, and enjoy her company. When she had her chemo, it was at the hospital that I worked at, and I was lucky to have a boss that let me take her and go sit with her while she had it done. He also told me that he could find me if he needed me "that's your mother, you do whatever you have to do". In that respect, I was very blessed.

I was sixteen the first time I remember my mother telling me that she loved me. She was borderline abusive, and any time anyone mentioned that there are hotlines now for people like her, she got pissed off. But really - there ARE hotlines now! She was verbally abusive to us as kids. We think that she was bipolar, but undiagnosed. She would go on diets, and start thinking some crazy stuff - one time she thought my uncle wanted her instead of my aunt - silly stuff like that.

It wasn't until we were all adults that she leveled off in her moods, and started to show her fun side. I remember a story of her and my aunts on a "girls" weekend away, where they all had to wear white gloves everywhere they went. And my mother was the driver of the car, and when she decided to leave a store, she would blow a whistle. If you weren't in the car when she put it in park, well, you got left behind. My aunts quickly learned to drop everything and run. Another time they got in an elevator, and when the doors shut, she started beating the crap out of my aunt. The doors slid open, she fixed her white gloves, and walked out like nothing was wrong. 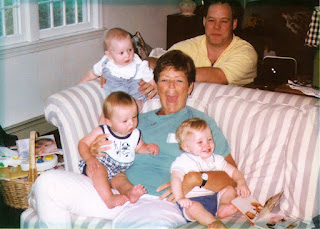 of sorts. For those of you that don't know - the boy had surgery on his head to repair a closed soft spot when he was 13 weeks old. Since then? Bumps, bruises, etc. but never have had to run him to the ER for anything worse than an ear infection or something along those lines. And I said then, after that - I can deal with anything. There is no worse feeling than having to hand over your infant to some stranger and hope you can see him in a few hours after having his head cut open and things moved around.

I run outside and he comes running up to me, face covered in blood, spitting it out. Screaming. Hysterically. I thought fleetingly of slapping him to calm him down, but realized that wouldn't happen. I finally get out of him that he got whacked in the face (still not sure yet WHERE) with a plastic toy gun. The blood is still gushing everywhere. For those that don't know - head wounds bleed. A LOT.
I finally get a look at what is bleeding and he's got a good gash on his forehead. I have him hold the towel to the cut, and tell him to get his ass in the car. I could tell that he'd need stitches. Once in the car, he realizes that he's going to the ER and that probably isn't a good thing, because there might be more pain involved. He starts to hyperventilate, moan, you name it. And me? I'm trying my best not to LAUGH. Does that make me a bad parent?

He ended up with 5 stitches. He actually, once he calmed down, was fine. Said the whole process was cool - and even thought that if it happened before Halloween he could have been Harry Potter.

No more nerf guns when it's dark out. The poor kid that hit him, by accident, felt horrible. And I was saying to him - I KNOW it was an accident, just tell me what happened!!!

Here he is in all his cuteness. And it's not that swollen, that was more lidocaine than anything. 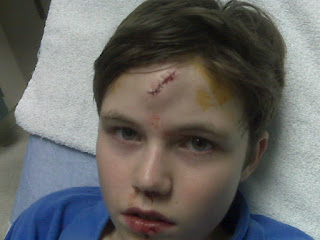 Love love love the Kenny Chesney song "I'm Alive" with Dave Matthews. I'm also loving this one these days - I'm not sure why, because there really isn't anyone that I could (or would want to really) call at 1:15AM, even if I were drunk. Maybe just the feeling of loneliness that the song conveys is one that I can relate to.

Who knew how much I'd love country music? Certainly not me.

I've been getting back in touch with a lot of old friends, and old boyfriends (not all became ex's on bad terms lol) on Facebook. What a great medium that is!

The boy actually has decent grades this semester. I think he has one more "E" to bring up and he's got all passing. YAY. I meet with the "team" next week and we're going to go over what does and doesn't work with him.

Who came up with the idea of wasabi peas? I love them.

I am in a funk of sorts. Don't feel like doing much. I might call and get back on my antidepressants, but I don't feel depressed really. Just funk. Anyone else ever get that way? Nothing excites me these days. I'm just kind of blah.