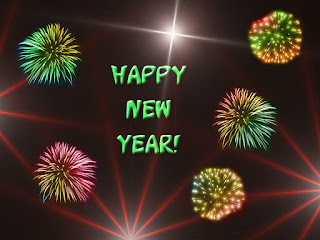 Ahhhhhhhh 2009. Glad to see you go. It's been a heck of a year. Busy, but in a good way, I suppose. Re-reading my 2008 post was interesting, but there wasn't anything really profound in it all. I still miss my family (including my aunt). I didn't go home for Christmas this year, for numerous reasons - financial included, but I also wanted to save the vacation time in case I need to take any off for friends in need..

This should be a big year. If all goes well, a year from now I should finally have my bachelor's degree. Yay!!

It's been 6 years since I moved to Michigan. I am a firm believer that everything happens for a reason, and maybe being there for my friend Kim is the reason that I moved here. Who knows....

I think maybe I'm finally ready to get into another relationship. We'll see if I can find a willing partner in crime, though. LOL There has to be a guy out there that wants an over 40 single mom with a mind of her own, doesn't there? LOL That can stand on his own two feet, supported by a strong spine and an equally strong will? 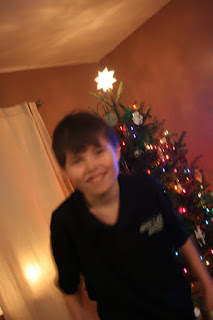 Hope Santa is good to everyone!

I've been so busy crazy, or is that crazy busy? Between trying to finish up the semester at school, Christmas shopping, work, etc. I have barely had time to do anything except work, school, sleep. Arrgh. I'm looking forward to a couple of weeks "off" before the next semester starts.

But what's been happening.. hmmmm lots.

After the first of the year, I'm being transferred to another courthouse. Which could be looked at one of two ways. Either it's Siberia, or the country club. I looked at it as a punishment, until I was told that I am the one that my boss can trust to go out there and run the office with no supervision. so I guess that's good. But it's going to add 20 min. to my commute in the morning, and that's not good. I'm going to be away from all my work buddies, so that's not good. Ugh. So I'm going - but I'm not thrilled about it but I will make the best of it.

Kim starts chemo this week. I've gotten 15 or so of her friends together and tomorrow we're going to have a surprise brunch with her. She has no clue what's going on, and it makes her nuts. I love it. LOL I just wanted to do something so she can relax and chill for a couple of hours and not think about everything that's going on.

I ordered Christmas cards. And did something different. I put a quote on them along with pictures of the boy that I usually include. The quote is "Christmas gift suggestions: To your enemy, forgiveness. To an opponent, tolerance. To a friend, your heart. To a customer, service. To all, charity. To every child, a good example. To yourself, respect." I must be getting soft in my old age. lol

I got a new computer for Christmas. Which means the boy got my old one for Christmas. No longer a need to fight for time on it. He is beyond geeked about it. And really, when the boxes arrived, there was no hiding what it was. Seriously - they put pictures of what it is on the outside of the box. So I get a call at work, asking if he can open one present early because there's really no point in wrapping it. LOL So he got one present early. The rest of the boxes are hidden away... muahahahahahaaaaaa

I went out with one of my girlfriends last night. Was overserved. Why is it when you party like a rockstar at night, you feel like trailer trash in the morning? LOL
I kissed a boy with dimples. Oh dimples and a goatee are a deadly combination for me. They just kill me. But it was a peck, nothing more. He's married - not sure what's going on there, but I avoided any kind of trouble and just went home.

A Christmas miracle has happened. The FFW has finally been tossed on her ass. Or at least moved out of the house - I really can't picture choosing to move less than a month before Christmas, so I'm going to go with tossed out on her ass. I don't know the story, nor do I really care. But there is justice in this world and it comes in many forms. Yippeeeeeeeeee!!

The best one had embedding disabled, but enjoy the song and listen to the message..

Labels: FFW, karma, liberty and justice for all, merry christmas

One of my best friends throughout high school and for years afterward was Ed. He's my son's godfather, and while we've lost touch in the past few years, I still consider him a great friend. I know his whole family, have for most of my life.

I get this message on FACEBOOK today from his wife (who has always had an issue with our friendship, and I think has something to do with why we've lost touch)...

Hey Kath, this is Donna. Unfortunately I'm writing to you with some bad news. Ed's mother passed away on Saturday, December 5th. She was sick since about August and at the end it was a true blessing, she had cancer and is now out of all that pain that she was in. We just wanted to let you know.

SERIOUSLY? Are you FUCKING kidding me?? you send someone a message like that on FUCKING FACEBOOK??????
Posted by K Dubs at 6:04 PM 6 comments:

Labels: stupid people should be shot

We've gotten our first snow. People have shown how retarded they can be when it's the first snow on the ground. Hopefully we've gotten that all out of the way, right? Right? Jesus, I hope so!

Kim went for her PET scan this week, not sure when the results will be in, but I didn't know that her PEE would be radioactive for a couple of weeks. WHO KNEW?!?!? I'm trying to think of how we can use that. Maybe go into a bank with a cup full and say "I'LL NUKE YOU WITH THIS PEE Unless you hand over $20,000"!?!? There's got to be something we can do with it. Anybody have a geiger counter I can borrow? Just the fact that it'll go off around her makes me silly.

We put up our tree last night. Went to Home Depot, got a wreath and a tree, put UP the tree, decorated the tree, and then I stepped outside for a quick smoke (yeah, yeah, I know). And I'm standing out there, looking at the house thinking that it looks really pretty, we've got the lights in each window, there is snow on the ground and holyshit is that the tree tipping over? Maybe I should go grab my camera and take a picture, it looks so nice - wait a minute. Did the freaking TREE really just fall over??? Whoops. Ok, I'll go back in. Yup. Water from the stand all over the floor. Ornaments spread out all over. And the boy, sitting in the middle of it all - telling me, "I couldn't lift it, it's too heavy". OH - so you figured you'd go back to watching "I CARLY"?????? He got up quickly and helped clean it up. It's leaning up against the wall now. LOL

Happy Sunday - will post pictures later of the loveliness.

Off to the lovely craft fair down the street. :) Who knows, maybe I'll find more dip.
Posted by K Dubs at 9:26 AM 3 comments: