The one that was all about JC!

Unfamiliar with this week's tune? Hear it here.

1) In this song, a woman is "hushed" by her lover. When were you last told to "keep it down?"
I have no idea.  Me?  Loud?  Oh wait.  It might have been... nah...  And completely aside - I read an old blog, and thought it would be fun to get back into it.  And what do I pick?  Saturday 9.  And what is special about THIS Saturday 9?  The video for the song "Voices Carry" was filmed in Boston.  I have friends in the music video.  Like when she is in the theater?  The guy sitting in front of her with the beard and the tux?  My good friend JC.  So good choice.... good choice....

2) Her lover tells her tears are something to hide. Researchers tell us that crying can be good for us, because by releasing emotional stress, it lessens physical stress on the cardiovascular system. Are you comfortable crying in front of other people?
Are we talking ugly cry, or weeping?  Aw hell, I don't care - if it's something to make me cry you're damn sure that everyone else around me is doing it too

3) In this video, the woman makes a scene by speaking up in a theater. Today theater goers are more likely to be disturbed by a cell phone ringing or its screen illuminating. Are you careful to turn your phone off in the theater, church, etc.?
Oh, see.  NOW I have to share a picture of it.. Isn't he a handsome devil?  And a great friend, one that you wish you had.  And John if you're reading this - holy shit your genes are strong, LOL..  Oh, and to answer the question?  Of course.  That's just rude. 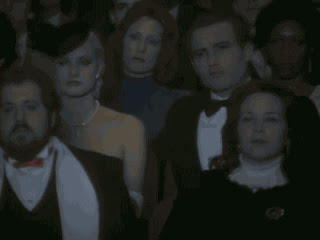 4) When this group, Til Tuesday, was still struggling, Cyndi Lauper was already a star. Cyndi offered to record this song, which would have brought the group some fast cash, but only if they agreed not to record it themselves. Obviously they didn't take the deal. Tell us about a time you took a risk on yourself, and it paid off.
Moved to Michigan.
5) Til Tuesday's lead singer, Aimee Mann, went to Open High School in Richmond, Virginia. This charter high school is dedicated to helping students become "self-determined thinkers and learners." Do you recall your high school as permissive or regimented?
High School is dumb.  High school kids are dumb.  And not being one to hold a grudge usually?  Mimi Gibson was so mean to me.  I still hate her.  LOL

6) Aimee has been on the road through 2017 and, like most artists, sells tour merchandise. Her line includes reusable tote bags. Do you bring your own bag to the grocery store?
I love Trader Joe's.  I love TJ's bags.  I love the fact that one opened just a couple of miles from me.  I'm going there this morning - AND I will bring my own bag!

7) Aimee has tried her hand at acting and appeared on Buffy, The Vampire Slayer. From Dracula to Barnabas Collins to Lestat, vampires are a popular culture staple (especially in October). What do you suppose accounts for their enduring popularity?
I don't know.  I don't get it.  Now zombies - that's totally different.  I just finished Season Four of Game of Thrones.  The Walking Dead is my ride or die.

8) In 1985, when this song was popular, Bruce Springsteen was at the top of the charts with Born in the USA. A massive commercial success, Born in the USA has sold more than 15,000,000 copies in the United States alone. Is it in your collection?
Um, do you KNOW me???? Here.  Have a gander at my boyfriend. 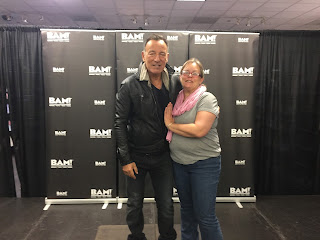 The Gal Herself said...

I'm so happy you like this week's choice, and that your friend gets to be our Saturday 9 Special Guest Star. (Though he does get very stiff competition from The Boss himself.)

I love your photo with The Boss.

I am Harriet said...

Very cool that your friend was in the video and that photo of you and your boyfriend...wooeee!

I think most of us have a Mimi in our high school memories. Well, unless you were a Mimi, I guess.

It's so cool that you have a friend in this particular video! And, yes, he is a handsome devil. I love bearded folk. And your boyfriend certainly looks familiar but I just can't quite place him. ;o)

Congratulations...you're the first one (so far) that i have read who has chosen the Indy 500.